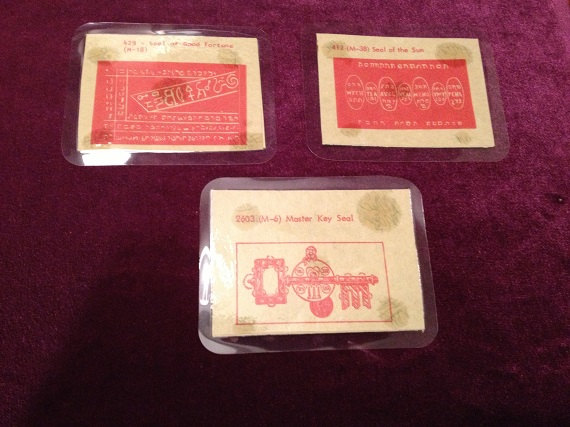 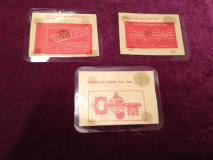 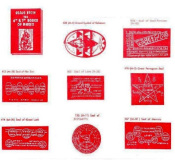 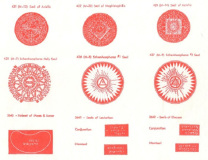 SKU:
$18.99
$18.99
Unavailable
per item
Please Read this listing for instructions on info I need when ordering! I cannot make this for you without the proper info and intent.
One (1) Laminated double-sided 6th & 7th Book Of Moses Seal talisman to be used for spiritual work (burn a candle on top of it, carry it in your wallet or pocket, place it on your altar). Can be used for love, money, success, mastery, protection, health, etc.

Each talisman is for one person and one concern or intent. In other words, the 2 chosen seals for your talisman should be related to the same goal you wish to achieve. If you have many different goals please order one talisman for each goal. Otherwise, the seals, sigil inside, written petition, and herbs & oils may conflict with each other; and a possible conflict with energies/spirits each seal is governed by.

These are ritually prepared with your name and a personal petition crossed with bindrunes, anointed with my own magickal oils appropriate for your concern in a quincunx pattern, smudged with my own herbal incense appropriate for the situation, and charged with your intent. They are ready to be used upon arrival, after you have held it in your hands visualizing your intent, and sealed it's energy. Your petition can only be seen if the seal is held up to a light source. They should not be held are looked upon by anyone other than yourself.

There will be two different seals - one on each side. This makes candle magick and rootwork more powerful.
Add to Cart
IMPORTANT:
If you would like a stronger link to the talisman - then you have the option of mailing your DNA to me or email any clear photo (head shot), so that it will be between the two seals. Let me know at checkout, otherwise I will just use your name and birth date.

The talismans or seals, are authentic reproductions form the book, which is sometimes called “Moses Magical Spirit Art”. According to tradition, the designs have many magnificent powers. They were taken from ancient Hebrew Holy Books and have been passed down through the ages until today when multitudes of believers carry or use them with faith in their effectiveness to bring results by magical means. People of all faiths, beliefs, and traditions of magick, use these to enhance rituals and spells.

NOTE:
At purchase: add your full name and date-of-birth. Please be very specific with what your intention or concern is, so I can select the perfect combination of seals. Let me know what you need it for and I will custom make your talisman. (ANY CONCERNS or INTENTION - Just Ask!) If you'd like more than one, just order the amount and the specific seals you'd like for each laminated talisman.

Choose two of the Seals below (I recommend that they be related):

36 SEAL OF SATURN – Called also the Seal of Spiritual Good Luck. This design is believed to attract favorable planetary vibrations when one is gambling or indulging in any game of chance.

37 SEAL OF MARBUELIS – For fascinating and bewitching others so that all secret knowledge can be obtained from them without their suspecting any sorcery on the part of the possessor.

106 SEAL OF AZIABELIS – For achieving great power over others, and to attract friendship.

156 SEAL OF JUPITER – Also called the Seal of Mystical Assistance. Can bring victory in legal matters: in winning court cases, and for settling disputes of all kinds.

400 SEAL OF TREASURE – When buried in the earth near where any treasures exist they will allegedly come to the surface themselves. The talisman can also be used in the home of help locate lost articles.

401 SEAL OF THE GOLDEN CANDLESTICK - or The Candelabra Seal for gaining one’s desires through prayers and candle rituals. It is believed to make one safe from all danger, strong as steel so that firearms cannot harm the person who carries this in their purse or pocket.

402 SEAL OF LOVE – Carry this talisman to assure one of being much loved and admired. It is treasured by those who wish to gain and hold the affections of another.

403 SEAL OF POWER – Carried to insure or restore one’s good health, to strengthen faith, and to influence those one meets toward the possessor of this talisman.

404 SEAL OF KNOWLEDGE – To receive information or guidance through drams or visions, sleep with this talisman under the pillow.

405 SEAL OF TREASURES – This design is used for finding any lost or stolen possessions.

406 SEAL OF THE AIR – (Also known as the Seal of Relief from Want) – Popular with those seeking work, it is believed to bring one the necessities of life.

407 SEAL OF FIRE – This is favored by those who seek influence, popularity, power, and dominance in any field.

408 SEAL OF WATER - or Seal of Great Fortune. This seal is useful in revealing treasure below the earth such as buried gold or silver, or treasures found in sunken ships.

409 SEAL OF EARTH – Called the Seal of Spiritual Assistance, this brings support and help from friendly gods and kindly supernatural beings to assist in the possessor’s endeavors and fulfillment of one’s plans and dreams.

410 SEAL OF BARBUELIS – Makes one master of all arts and secret knowledge so that others can be dominated by the possessor without knowledge of the influence being exerted upon them.

411 SEAL OF MARS – An aid in holding marriages and friendships together in the event of quarrels between the parties involved, or where there are disturbing influences from outsiders. It can help settle arguments peaceably in favor of the one who carries this talisman.

412 SEAL OF THE SUN – Known also as the Seal of Honor and Wealth. This talisman is carried to attract plentiful gold, silver, and other of life’s good blessings.

413 SEAL OF VENUS – Also known as the Seal of Secrets. One places this talisman beneath the pillow to learn secrets through dreams, and to prevent others from learning of private confidential matters. When carried in purse or pocket, it serves to bring assistance in one’s business dealings.

414 SEAL OF GOOD LUCK – To achieve success in games of chance, this can be anointed just before playing and secreted in one’s sleeve or pocket.

415 SEAL OF SPIRITS – To compel spirits to appear and serve one’s needs, this design is said to be of great value in bringing quick service and help in all things.

416 SEAL OF ORION – or Seal of General Citation. This seal is carried by those who wish to have their wishes fulfilled and to attract honors and respect from others.

417 SEAL OF LONG LIFE – Protects from misfortune and misery, and assures one of a lengthy life.

418 GREAT PENTAGRAM SEAL – Protects from black magic, and gives one freedom from fear, along with a clear mind, a sunny disposition, and good judgment in all matters.

419 SEAL OF GREAT GENERATION – Designed to attract wealth, honor, and promotions or advancement in one’s work.

420 SEAL OF MERBEULIS – Also known as the Seal of Special Attraction. This is designed to captivate and control all those whom the possessor may encounter.

421 SEAL OF ARIELIS – Compels others to do the possessor’s bidding, and commands lost treasures from land or sea.

422 SEAL OF MEPHISTOPHILAS – For overcoming, conquering, and controlling one’s enemies. It also guards one against the plots of others.

423 SEAL OF MAGIC – This Serpent Seal is designed to bring magical assistance toward attaining one’s wishes, desires, needs, or requests.

424 SEAL OF AZIELIS – Designed to compel treasures to come from the earth, and to coerce others to obey the possessor’s wishes and commands.

425 SCHEMHAMPHORAS HOLY SEAL – Alleged to bring vengeance on one’s enemies, assist in contact with departed souls, and assure the possessor a share of worldly goods.

426 SCHEMHAMPHORAS #1 SEAL – For great success in finances and in business. Attracts customers and money.

427 SCHEMHAMPHORAS #2 SEAL – Great mystical powers are said to come to those who carry this. It is a highly religious talisman, bringing to the possessor divine guidance when needed.

428 GRAND SYMBOL OF SOLOMON – For divine guidance, wisdom, protection, and understanding in all matters. This was King Solomon‘s major virtue – Wisdom.

429 SEAL OF FORTUNE – The highest talisman of good fortune, bringing great success in business and many blessings in one’s personal and family life.

567 SEAL OF MERCURY – Brings wealth, a knowledge of alchemy and of chemistry, and can draw treasure from beneath the earth.

2600 BREASTPLATE OF AARON – Said to offer protection from sudden or violent death.

2601 BREASTPLATE OF MOSES – For protection from all harm.

2604 SEAL OF JESUS OF GOD – For divine protection conquering any or all obstacles, and achieving victory in one’s work.

2605 SEAL OF RAB CALEB – Doctor Oriental – Uses for medical assistance and to maintain a healthy body and a clear mind.

2606 SEAL OF TREASURE, ELEVATION & SPIRITUAL REDEMPTION – Reputedly brings peace and serenity to the place where this is kept, or to the person who carries it.

2607 SEAL OF THE WITNESS- Bearing the initial of the Latin version of the inscription written by Pilate and placed on the cross, “I.N.R.I.” – Jesus of Nazareth, King of the Jews – this design reputedly brings the owner God’s richest blessings.

2608 CHALICE OF HOLINESS – Used to obtain serenity and peace of mind, along with great spiritual strength. The seal gives the names of the Creator and the characters on the Ark of the Covenant.

2609 BALAAM‘S SORCERY SEAL – This contains the names of the Seven Tables of the Ark of the Covenant, and is of great significance as it reputedly brings vengeance upon one’s enemies.

2611 GENERAL CITATION SEAL – This is the seal used by Moses in calling up all spirits and is recommended to be carried with any of the other seals being used. Can be used to reinforce others seals and spells.

2640 HELMET OF MOSES & AARON – Wear on the person and you will not succumb to a sudden death.

2641 SEALS OF LEVIATHAN – Use this, held flat between the tow hand, to call and dismiss the spirits to appear and obey commands.

2642 SEALS OF ELEAZAR – With this talisman one calls and dismisses the spirits through which all things dissolve into nothing.

2643 ARK OF THE COVENANT – Hold in the hands and expect protection from misfortune, plagues, and disaster.

2644 MAGICAL LAW OF MOSES – Use to assemble the spirits or devils who cause the dead to appear.